This blog is long overdue, I know, but here is a quick update.

As you may remember, back in January I was off up to Liberty’s to show my work at their 2016 open call. I won’t bore you with too many details as the day was long, very long. After about five or six hours of queuing I sat down in front of two lovely representatives from Liberty’s jewellery department (I know I should have taken their names but I was so flustered my brain went to mush). With all of my drama training you would think I would be good a presenting but this was different, it was very personal to me. I found myself gabbling through my prepared presentation and almost hurling my pieces at them. (I had been told before that they were keeping very strictly to the four minute time slot). Still, They were very positive about my work and said they could see the craftsmanship that had gone into them but, as I could have predicted, it all came down to my old enemy: pricing.

I had set out my cost prices being completely honest to the formula: materials + Labour + 5% overheads + 20% profit. But then of course with their markup (Something like x 2.75) we were looking at selling each piece for over £200 and for that they said they would expect solid gold or silver frames. It is a fair point. They did go on to suggest trying another well respected shop to approach so I believe they thought there was something in my work that could fit in given the right audience.

So, where do I go from here? I have looked at sterling silver frames and found a good supplier, but as they are really designed for semi-precious stones I found it difficult to insert the embroidery. I had to adapt the designs as I couldn’t find exact shapes:

This is one way forward. Another way is to look at how I can reduce that cost price. I won’t pretend that each piece can be done in an hour, it can’t, on average I spend between 4-6 hours on each piece. I don’t want to simplify the embroidery as this is my Unique Selling Point. So, I am working on some smaller pieces again.

A simpler image in a smaller frame was where I started and would always draw the most interest at craft fairs. I am still making the larger pieces, in the bigger frames, as sometimes I need to think outside the tiny box.

In my next blog I will talk about Instagram and the amazing community of craft people I am getting to know there. I have already drawn inspiration from joining in with the #dailysketchbookgroup which has led to these new designs:

There is such a warm craft community out there, even my six hours queuing at Liberty’s was made enjoyable by my queue buddies Claire Gaudion and Half Cut Candles 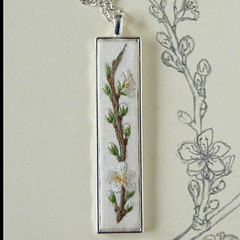